Get to Know the African Shell Dwellers

Get to Know the African Shell Dwellers

What makes the shell dwellers such as the Neolamprologus tretocephalus and the Neolamprologus cylindricus, so popular? Shell-dwelling cichlids, which originate from Lake Tanganyika, get the prize for the bravest fish. Their personalities are quite disproportionate to their tiny size. They are aggressive, bold, are little tyrants, but absolutely adorable.

African shell dwelling cichlids make great aquarium fish because they are small in size so they don’t need a large tank like other larger species such as several of the more popular Malawi Haps. Their sociable in nature allows larger numbers of them to be kept together in a smaller-sized tank.

There are several species of cichlids. The basic care requirements of African cichlids regardless of their species is very similar. Let’s look at the basics of setting up an aquarium to accommodate a cichlid. 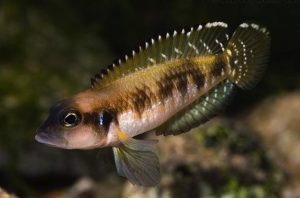 • Smaller species (1 pair) need a 45 x 30 cm/18 x 12 of living space.
• Larger species will need a slightly larger area.
• Consider a large tank if you want to see the interactions of a social group.
• Always use a fine sand bottom, these little guys are diggers.
• Carefully research other fish if placed with them, if their territories overlap there may be a duel to the death.

Since shells are such a huge part of these tiny fighter’s lives, it’s important to have the right type of shell for them. Some shells that work well are escargot shells, turbo shells, whale eye shells, or any shells similar in size and shape.

Other considerations for keeping the African cichlid include the following:

Cichlids are relatively easy keepers. In a community setting, you will enjoy watching them act like warrior tyrants, stealing women and shells from their neighbors and their quests for aquarium domination.

Prized for their bright colors, African cichlids are amongst the most common aquarium fish. Despite their popularity, they aren’t... read more

Because of their beautiful colors and active nature, cichlids are a popular species for aquarium hobbyist, but you will... read more

What Kind of Fish do Cichlids Safely Cohabit with?

Cichlids have become popular aquarium fish because of their beautiful colors and ease of care. Their striking coloration rivals... read more

Since there are more than 100 species of African cichlids, and they have such beautiful tropical colors they are... read more

Are African Cichlids Aggressive? How to Deal with the Aggression

When selecting fish for a tank, nothing catches the eye quite like African Cichlids. These visually-appealing, dynamic fish add... read more

Beginner fish keepers are often wary of African Cichlids because of their reputation to be far more territorial and... read more

Get to Know Tropheus Cichlids

Tropheus cichlids are a type of small, highly territorial fish that are typically dark with bright-colored patches - for... read more

Cichlids are charming fish often beloved by owners for their individualistic nature, striking colors, and general intelligence. If you're... read more

Best Types of Catfish to Keep with an African Cichlid

Catfish can be an excellent addition to an African Cichlid aquarium. As the house cleaners of the freshwater aquatic... read more